On April 20th, at approximately 7:30 PM, Lincoln County Search and Rescue (SAR) had just finished successfully locating a missing subject in the Yachats area when they were re-deployed to find a missing 83 year-old male in the South Beach area.  SAR personnel began searching the area on foot and via ATV, but were unsuccessful during the first day.

Search efforts continued on April 21st and lasted the entire day.  Two K9 teams from Lane County Search and Rescue arrived to assist the Lincoln County teams.  As darkness began to fall, an ATV team was retrieving a K9 search team from their mission area and noticed a human form on a clear cut about 500 meters away.  The subject did not respond to yelling or signalling.  The nearby ground search team was re-tasked to make contact with the subject, but had difficulty reaching him due to hazardous terrain.

The ground search team reached the subject and confirmed he was the missing 83 year-old.  On-site personnel determined the man was unable to walk out due to medical and terrain considerations.  A US Coast Guard helicopter was dispatched to the location to airlift the man to the hospital.  SAR personnel and the Coast Guard rescue swimmer packaged the man in a folding stretcher in preparation to be hoisted by the helicopter.

Darkness, close proximity to trees, and updrafts from the steep terrain made the hoisting operating difficult.  The Coast Guard helicopter burned significant fuel while expertly hovering above the responders.  After hoisting the man, the aircrew advised SAR personnel they did not have enough fuel for another hoisting operation for the rescue swimmer.  The rescue swimmer hiked out with the SAR personnel and was expedited back to the Coast Guard facility.

During the mission, SAR personnel traveled over 60 miles either on foot or searching via ATV.  Two new ATVs purchased through a grant from the Siletz Tribe were instrumental in the successful resolution of this search.

Sheriff Curtis Landers said of the operation: "Steadfast dedication from our Search and Rescue volunteers and strong community partnerships are what saved this individual's life.  Thank you to the US Coast Guard, Lane County Sheriff's Office, Pacific West Ambulance, and our amazing volunteers." 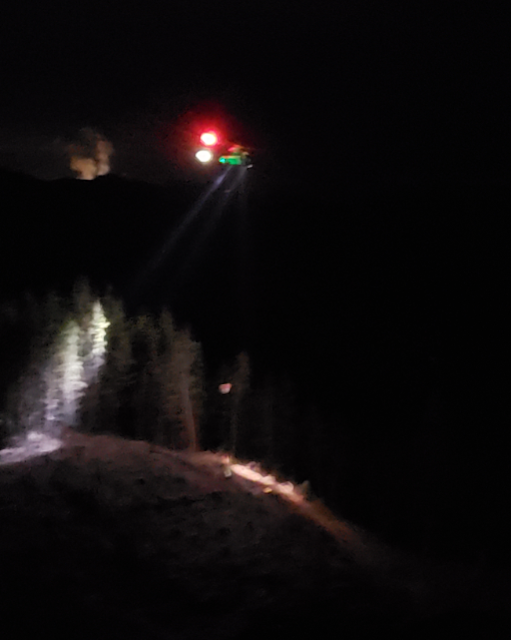