On 05/16/19 at 10:34 p.m., officers from the City of Bend Police Department responded to 7- Eleven located at 810 NE Greenwood for a report of a naked, intoxicated male who had fallen in the parking lot.  The male was also reported to have failed to pay a cab driver for a ride he had received to that location.

Arriving officers contacted the subject, later identified as Tony Latrell Williams and detained him in handcuffs following a brief theft investigation.  After being handcuffed, a kitchen knife with an approximately 10 inch blade was located in his waistband.  Williams became uncooperative with officers and assaulted one of the officers by kicking her in the head.

Arriving officers assisted in controlling Williams who continued to actively resist being arrested by flailing about and trying to pull away from the officers.  Williams was eventually restrained using a WRAP restraint device.

The WRAP restraint device is designed to immobilize a subject in an effort to protect them and others from being physically injured while in police custody.

Williams was transported to Deschutes County Adult Jail and lodged on the listed charges.

Attempted unlawful use of a weapon. 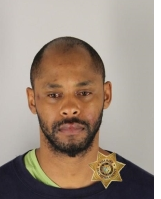