On 05/26/2019 at approximately 1:13am, a Deschutes County Deputy was traveling west on NE Bear Creek Road near NE Alpenview Lane and reported to dispatch that a vehicle had swerved into his lane and almost hit him head on.  The deputy took evasive action, going off the roadway to avoid being struck by a gold 1998 Buick Century.

The deputy turned around to attempt to stop the vehicle and the driver failed to yield to emergency lights and sirens.  Bend Police Officers, Sunriver Police, and additional Deschutes County Sheriff’s Deputies responded to the area to assist.

The pursuit lasted approximately 9 minutes.   Motor vehicle traffic in the area was minimal.  The suspect reached a maximum speed of 55mph on SE 3rd Street, but speeds were generally in the 35-40mph zone.  The suspect avoided multiple attempts to utilize a Pursuit Immobilization Technique (PIT).  Spike strips were successfully deployed by Bend Police on SE Parrell Road.  The vehicle began to slow as the tires deflated and came to rest on a boulder at the dead end of Aberdeen Drive near Penhollow Lane.

The driver, Kelly Joe Meyer of Bend Oregon, was arrested on multiple charges to include Fleeing or Attempt to Elude – Felony, Felon in Possession of a Firearm, 3 counts of Reckless Endangering, and Possession of a Controlled Substance.  A stolen handgun was located in the vehicle.  Deputies also recovered body armor, tactical gear, a security badge, and an older Bend Police shoulder patch from the vehicle.

Two passengers in the vehicle were released with no charges.  The passengers told investigating deputies that Meyer had been “playing chicken” with other motorists on the roadways.

The investigation is continuing on this case. 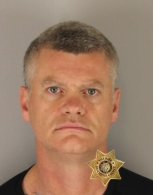