Corvallis Women Arrested for Arson I

On June 15th, 2019, at 3:18am, Corvallis Police Department Officers, along with Corvallis Fire, were dispatched to the area of the Corvallis BMX track at 115 SE Chapman PL for a report of a large fire.  Responders arrived and found the fire burning adjacent to two illegal campsites. Corvallis Fire Department was able to extinguish the flames.  Officers determined that there had been two fires set, one of which was extinguished by a male who had been sleeping in a tent a few feet from one of the fires.  He had several items of personal property damaged in that fire, and was able to provide a suspect name.  The other fire was near a second campsite which was unoccupied at the time.  No persons were injured as a result of the fire.

Officers located a female suspect hiding in the grass nearby, identified as Kassandra Schumacher (25) of Corvallis.  The investigation determined the fires were intentionally set.  She was taken into custody without incident at transported to the Benton County Jail where she was lodged on charges of Arson I and Criminal Mischief II, with a bail amount of $112,500.  Schumacher was previously arrested on June 11th for charges of Reckless Burning, Possession of Methamphetamine, and Interfering with a Peace Officer after starting a small brush fire near the Mary’s River in the 2500 block of SW Philomath Blvd. 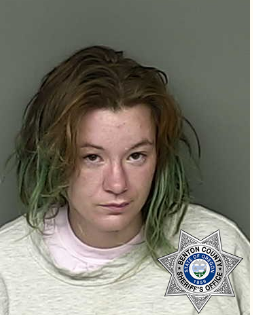