On Wednesday June 26, 2019 at approximately 7:15 p.m. officers from the Ashland Police Department responded to the Lithia Park playground on a report of a man exposing himself to minors and making statements about being the "boogie man." Officers identified Gerald Sanders, a 50 year old man who is listed as an Ashland and Medford area transient, as the person in question.

The investigation revealed that Sanders was exposing his penis near children, urinating and making the boogie man comment. Sanders was verified to be a registered sex offender for a past conviction of luring a minor. Sanders was taken into custody for public indecency (felony) and disorderly conduct.

Additionally a detainer was placed on Sanders by his probation officer and he was trespassed from all Ashland Parks for a period of six months.

There is no indication that Sanders made contact with any minors. Anyone who has additional information on this case in encouraged to call the police department. 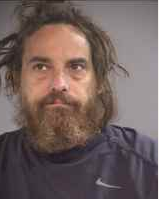