ROSEBURG, Ore. - The Douglas County Sheriff's Office is currently seeking information into the whereabouts of a missing Roseburg man and his 2 year-old daughter.

29 year-old Sean Michael Moss and his daughter, Madison Moss were reported missing on Monday, August 12 at 10:18 am. They were last seen by Moss' co-worker on the evening of Friday, August 9th.

Family members were expecting Sean and Madison to attend the Douglas County Fair on August 10th, but they did not arrive.

Sean drives a dark green Chevy Trailblazer with front end damage on the right side of the bumper with Oregon license plate 549DBU.

Sean is described as 5'9'' tall and 160 pounds with brown hair and brown eyes. He has scars from his chin to his waistline. He also has a full back tattoo and a tattoo that reads "Lilly" on his left arm.

Madison is described as 3'0'' tall and 25 lbs with curly brown hair with one green and one hazel eye.

If you have any information which may help locate both individuals, please contact the Douglas County Sheriff's Office at 541-440-4471 or contact your local law enforcement. 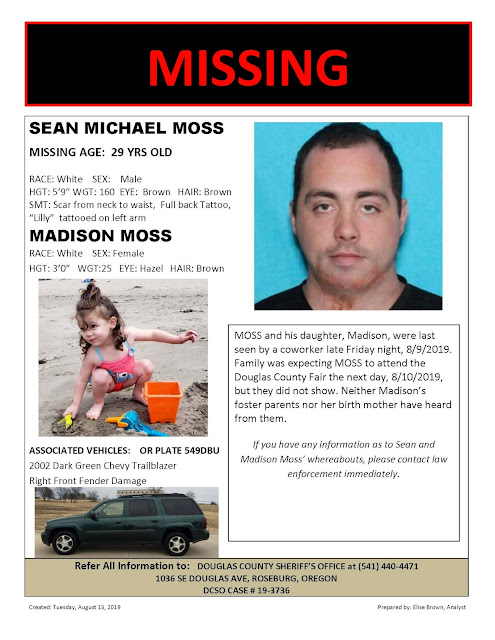