Oregon State Police (OSP) is continuing the investigation into this morning’s fatal truck crash on Interstate 5 near Rogue River.

On September 12, 2019 at about 3:39 AM, OSP troopers and emergency personnel responded to a fatal truck crash on Interstate 5 near milepost 45.

Preliminary investigation indicates that an International Box Truck hauling electronics, operated by Pavlo HRYZHUK, age 21, from Citrus Heights, CA, was traveling southbound on Interstate 5.  For unknown reasons the truck drifted to the right and collided with a large section of guardrail before traveling off a bridge and coming to rest on the roadway below.  The truck came to rest on Twin Bridges Road, which is the access to Valley of the Rogue State Park.

Hryzhuk was pronounced deceased at the scene by first responders.  Investigators are looking at the possibility of fatigue contributing to the crash.

Interstate 5 traffic was not affected during the crash.  The northbound exit to Valley of the Rogue State Park is currently closed while the truck is being recovered.

OSP was assisted at the scene by Oregon Department of Transportation, Jackson County Sheriff’s Office and Caveman Towing. 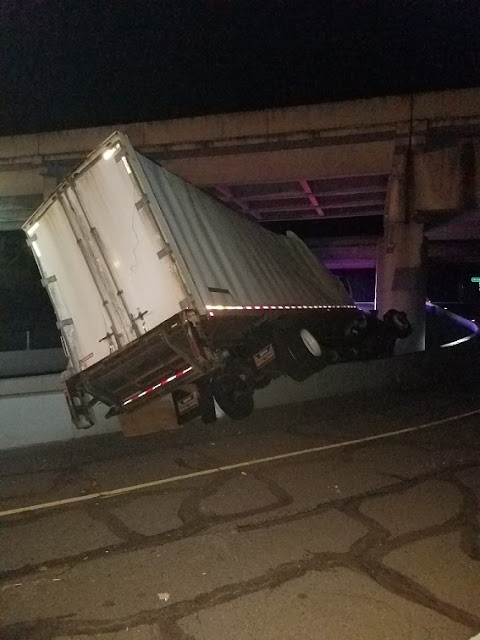