DOUGLAS COUNTY, Ore. - A $1,500 reward is being offered for credible information which directly leads to the arrest of 34 year-old Jason Ryan Taylor.

Taylor is known to law enforcement in both Douglas and Josephine Counties and thus far has avoided apprehension. Taylor travels between the two counties committing crimes and victimizing property owners. Additionally, he currently has active warrants out for his arrest.

Both counties have partnered with the United States Marshal's Service to bring Taylor to justice. A $1,500 reward is now being offered in hopes that anyone with information will step forward.

Those who are harboring or assisting Taylor may also face criminal penalties, including arrest.

Taylor is a white male adult described as 5'09'', 150 lbs with brown hair and brown eyes. He is known to alter his appearance to avoid recognition and capture.

All information about Taylor should be routed to the Douglas County Sheriff's Office at (541) 440-4471 or by email dcso.pio@co.douglas.or.us. If Taylor is spotted, do not approach him but call police immediately. 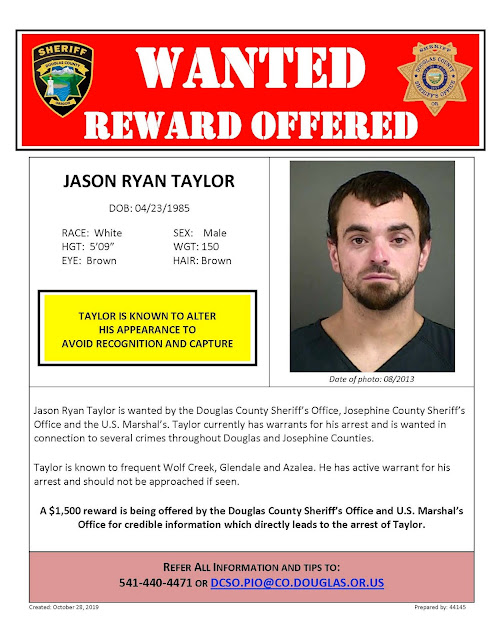