On October 11, 2019 shortly before 3:30 pm, the Deschutes County Sheriff's Office was dispatched to a welfare check at Smith Rock State Park regarding someone yelling.  A Special Services/Search and Rescue Deputy was sent to the scene.  While responding, more information was provided that aided narrowing down the subject's location and that the subject was possibly injured. The subject was later identified as 23 year old, Ian Rapp.

SAR Volunteers and a Deputy hiked to the area below where Rapp was believed to be located in the area of Voyage of the Cow Dog, which is a route in the Picnic Lunch Wall climbing area.  It was determined initial rescuers would have to access Rapp's location from below, while additional rescuers went to the top of the formation to scout a location to establish a system to rescue Rapp.  Four rescuers climbed a multi-pitch route to a location above Rapp, traversed (moved laterally) to a location where they could rappel to Rapp's location.  The first rescuer, a SAR Medic made it to Rapp at approximately 6:15 pm.  He was not in an area where climbers would normally go and appeared to have fallen and tumbled approximately 150 feet to the location from above.  This area was an area of loose and unstable rock.

Rapp appeared to be seriously injured and in a very precarious position. A technical rope system was rigged above Rapp, which was complicated by terrain and darkness.  Rapp was subsequently raised to the top of the formation and transported by wheeled litter down the Misery Ridge Trail to a waiting Life Flight helicopter, which flew him to St. Charles Medical Center in Bend.  Rapp left the scene at approximately midnight.
The Deschutes County Sheriff's Office appreciates the excellent relationships with Redmond Fire and Rescue, Oregon State Parks, and Life Flight. 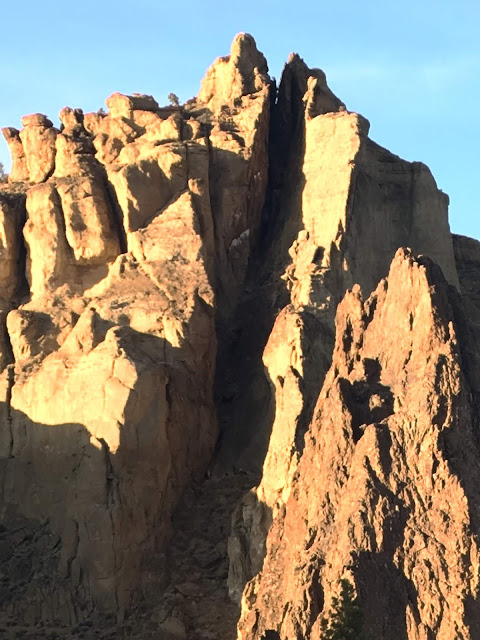