On October 16, 2019, an OSP Trooper responded to a complaint of suspicious hunter activity within the city limits of Ashland.  A local resident in the 600 Block of Thornton Way, reported observing a male loading a deer into a pickup while parked on a city street.  The reporting party approached the male to inquire about the deer but the male then drove off.

A license plate and make of pickup was obtained.  The Trooper arrived on scene and contacted multiple neighboring residents.  The Trooper found a short blood trail leading from a bush, which was against a neighboring house, that lead to a row of hedges along the city street.  This evidence along with the reporting party’s observations, showed that the suspected deer may have been shot while bedded down next to a house and loaded into the pickup while parked on the street.

With the help of another Trooper, the suspect was located and interviewed.  Faced with the evidence and resident observations, the male hunter admitted to shooting the buck deer as it laid in its bed under a large bush against a house.  The male stated he shot from inside his vehicle while knowingly parked on a city street in Ashland.   The male had dumped the buck deer and rifle on the Tiller/Trail Highway after the incident, which the Trooper recovered.  The deer was found to be a trophy class 4x4 buck.

Further investigation found where the bullet exited the buck deer and penetrated the house above the front door.

The suspect, Dustin McGrorty, age 38, from Riddle, was charged with Hunting Prohibited: Within City Limits, Unlawful Take/Possession of Buck Deer, Unlawful Use of Weapon, and Criminal Trespass II.  He was warned for Hunting on Public Roadway and Fail to Validate Tag.  A second adult male, name not released, will also be charged with Aiding in Wildlife Offense and Criminal Trespass II.

The buck deer and rifle were seized as evidence.

The meat was salvaged and donated to a local charity. 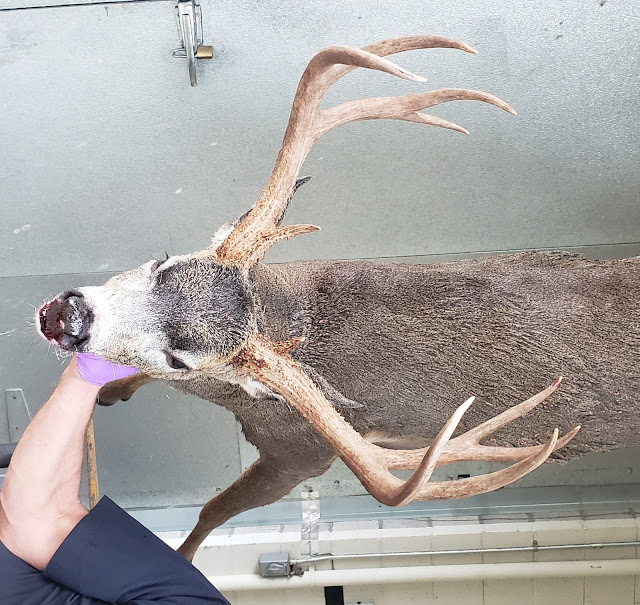