Yesterday officers responded to reports of shots fired at Quatama Crossing Apartments, 650 Northeast Autumn creek Drive. 9-1-1 callers reported a man fired several shots from a pistol into a parked car before driving away in a Subaru Outback.

An officer responding to the call found a car matching this description and stopped it westbound on East Main Street west of Southeast Borwick Street. As the officer got out of his patrol car, the Subaru accelerated away.

The Subaru lost control at the intersection with Northeast Century Boulevard and crashed into the driver’s side of a Toyota 4Runner waiting to turn left at the intersection. The Toyota’s driver, a woman, and a passenger in the Subaru, a man, were transported to the hospital with non-life-threatening injuries. The Subaru’s driver and its three other passengers were uninjured.

Officers arrested the Subaru’s driver, a 19-year-old man, and recovered a pistol from the car. He was determined to be the suspect in the shooting. The car damaged in the shooting was unoccupied during the incident, and no one was injured by gunfire.

The man arrested for yesterday's shooting was Austin Schnell, 19, of Albany. Officers lodged him in the Washington County Jail for unlawful use of weapon, first-degree criminal mischief, unlawful possession of firearm, attempting to elude police, reckless driving, fourth-degree assault, and four counts of recklessly endangering. 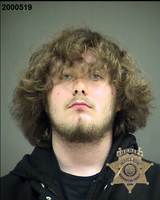