Dispatchers initiated telephone CPR until deputies arrived, who attempted lifesaving efforts. The child, identified as 1 year-old Ember Alice McBride, was transported by ambulance to Mercy Medical Center where she was pronounced deceased upon arrival. Detectives and the Douglas County Medical Examiner began an investigation into the death.

On Friday, January 10, 2020, a forensic pathologist determined Ember's death was the result of blunt force trauma and ruled it a homicide. The Douglas County Major Crimes Team was activated at that time. 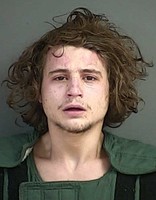