On Sunday, January 19, 2019, around 5:30 a.m., Multnomah County Sheriff’s Office patrol deputies were dispatched to a 911 call from a Wood Village residence. Deputies responded to a residence located in the 22900 Block of NE Halsey St. and contacted a woman who reported that a stranger broke into her home and sexually assaulted her. The man left the residence before deputies arrived. Deputies searched the area for the suspect with the help of a police K9. Based on the description provided by the victim, deputies located the suspect outside a nearby apartment complex approximately three hours later. Alfredo Guzman, 24, was taken into custody without incident.

Detectives learned Guzman, a stranger, entered through an unlocked door. They also learned the woman’s young children were present in the home at the time the incident occurred. Guzman is charged with 27 total counts on the following crimes:
Because of the nature of the crimes, MCSO will not be providing media interviews at this time. 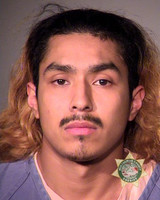