Over the past several months, two detectives from the Washington County Sheriff’s Office Violent Crimes Unit have been investigating 26-year-old Lafayette A. Castillo of Beaverton.  Detectives learned Mr. Castillo used Snapchat and Instagram to pose as a high school student so he could talk with children online.  He then met children in person and sexually assaulted them.

Mr. Castillo was arrested on January 15 and indicted by a grand jury on January 24 for sex crimes involving two victims, ages 12 and 14.  His bail is set at $1.5 million and he is being held on the following charges:
If you have information about Mr. Castillo or can help identify other potential victims, please call the Sheriff’s Office at 503-846-2700. 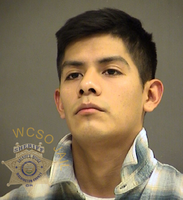