Detectives from the Washington County Sheriff’s Office Violent Crimes Unit have continued investigating the circumstances that led up to the shooting death of Philip Cloud on September 23, 2019. As part of the ongoing investigation, detectives executed several search warrants and interviewed dozens of people.

On January 8, 2020, detectives secured an arrest warrant for Tracy Lynn Cloud, age 46. Ms. Cloud was the estranged wife of the victim in this shooting.

Ms. Cloud has been lodged in the Washington County Jail on charges of second-degree murder and unlawful use of a weapon.

The Washington County Sheriff’s Office wishes to thank the United States Marshals Fugitive Task Force for their assistance with this investigation. 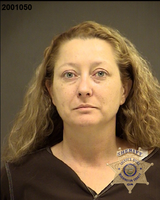