“Threatening a mass shooting is a serious crime whether or not an individual plans to act. This is a crime that undermines Americans’ fundamental right to live and work without fear,” said Billy J. Williams, U.S. Attorney for the District of Oregon. “We will continue to diligently respond to and prosecute criminal threats of violence to the fullest extent of the law.”

“Using social media outlets to threaten violence of any kind victimizes individuals and undermines the safety of our communities,” said Renn Cannon, Special Agent in Charge of the FBI in Oregon. “The FBI remains committed to working with our state and local partners to respond quickly to threats and keep our communities free from violence and intimidation.”

According to court documents, sometime on or before August 22, 2018, YouTube removed Douglas’ video channel for violating the platform’s terms of service. In response, on August 23, 2018, Douglas posted five tweets threatening violence against YouTube employees. In one of the tweets, Douglas threatened a “bigger mass casualty” event, appearing to reference a prior shooting incident at YouTube’s headquarters in April 2018 that injured three employees.

Later on September 8, 2018, Douglas posted a tweet stating “Hey why do you guys keep ignoring me would it be better if I leave you with no other options like your [sic] leaving me…I’m beyond pissed…I wonder how I should deal with this frustration.” Finally, on September 17, 2018, Douglas tweeted a direct threat at one of YouTube’s senior leaders saying “…I’m coming for you today #pray.”

On October 4, 2018, a federal grand jury in Medford, Oregon returned a one-count indictment charging Douglas with cyberstalking. Later, on January 14, 2020, he was charged by criminal information with one count of making interstate communications with the intent to extort. Douglas pleaded guilty today to the latter charge.

As part of the plea agreement, Douglas has agreed to pay restitution in full to his victims as determined and ordered by the court at sentencing.

Douglas faces a maximum sentence of 5 years in prison, a $250,000 fine and three years’ supervised release. He will be sentenced on May 14, 2020 before U.S. District Court Judge Ann L. Aiken.

This case was investigated by the FBI and prosecuted by Judi R. Harper, Assistant U.S. Attorney for the District of Oregon.

Anyone with information about real or perceived threats of violence should call the FBI at (503) 224-4181 or submit a tip online at https://tips.fbi.gov. For immediate threats to life and safety, please call 9-1-1. 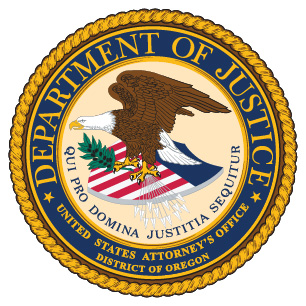