On 01-31-2020, at approximately 6:08pm, Josephine County 911 received a call of a reported shooting in the area of SW 9th and SW H Streets.  Officers responded and determined one male had been shot and was deceased.  Several individuals were detained and have been transported to the Grants Pass Police Department for interviews.

At this time there is no further threat to the public.  Officers and Detectives will be on scene for most of the night processing the scene for evidence.  The Oregon State Police Crime Lab has been requested to assist with the scene.  Josephine County District Attorney Josh Eastman has also responded.

The name of the deceased male is being withheld at this time pending notification of next of kin.  The are of SW Pine Street between SW H and SW I Streets will be blocked to traffic for an undetermined amount of time.  Please avoid the area until the roadway has been cleared.  Further updates will follow as new information becomes available and is approved for release.

Anyone with further information is asked to call the Grants Pass Department of Public Safety at (541) 450-6260.
UPDATE

Resulting from the shooting investigation, detectives with GPDPS arrested and lodged 68 year old Steve Daniel Cox for second degree murder.  The 37 year old shooting victim was positively identified as Joshua Wilson Wright.  The investigation is ongoing and additional charges may follow.  Detectives, along with the Oregon State Police Crime Lab, are still actively working the crime scene. The roadway will continue to be closed for the next few hours. 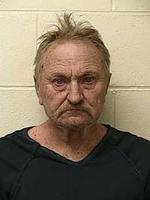