On March 22nd, 2020 at about 2330 hours, Newport Police and Newport Fire Departments were dispatched to 226 NE 3rd St on the report of possible arson fire.

Responding personnel learned a fire was started in the garbage storage area, which was attached to a 4-plex apartment. A resident of the 4-plex was alerted to the fire and investigated. When they got to the area they noticed flames erupting from the garbage storage area. The resident then noticed Ashley Kayla Rose Hunt, 24, who also lives in the 4-plex, leaving the area of the fire. The resident grabbed a garden hose and began trying to extinguish the fire. When doing so, Hunt shut off the water supply to the hose they were using.

The investigation revealed Hunt had been acting erratic all day, and had told several of the occupants of the 4-plex that she was going to burn down the complex.

At least two of the other apartments in the complex were occupied at the time of the fire. The fire caused damage to the storage area and had begun to burn the siding on the apartment complex.
Hunt was evaluated at SPCH prior to being lodged at the Lincoln County Jail on the listed charges:
The investigation is continuing by the Newport Police Department, The Newport Fire Department, and the Oregon State Fire Marshal’s office. Anyone with additional information should contact the Newport Police Department. 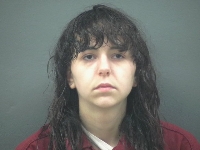