On March 28th, 2020 at about 0015 hours Roseburg Police responded to a traffic collision in the parking lot of Red Robin in Roseburg.  A subsequent investigation revealed that Isaiah Irvin (34) of Roseburg was driving south on Stewart Parkway in a 2007 Hyundai Azera, allegedly at a very high rate of speed, and missed the curve in front of Red Robin.  His vehicle went onto the sidewalk, through the grass and bushes in front of Red Robin, and across the mall driveway south of Red Robin.  Irvin’s vehicle struck the concrete curbing, which broke off a 4’ section, sending concrete and flowerbed debris over 60 yards.  The vehicle went airborne for about 10 feet before hitting the ground again and then slid about 45 yards into a parked 2005 Toyota Tacoma pickup.

The Tacoma was parked next to a 2003 Chevrolet Silverado and a 2007 Honda Civic which were all originally facing Stewart Parkway.  The force of the collision, shoved the Tacoma into the Silverado and the Civic and all three ended up facing north.  The owners of the vehicles, and some other pedestrians, were standing near the vehicles and had to scatter to avoid being struck by Irvin’s vehicle as well as their own vehicles and the debris sent flying from the impact with the curbing.  Rough estimates suggest Irvin travelled over 100 yards after he left the roadway, before colliding with the first vehicle.

Witnesses stated Irvin had passed them on Stewart Parkway near Mercy Medical Center at a very high rate of speed just before the collision, and they never saw his brake lights activate when he left the roadway.

The Roseburg Fire Department and Bay Cities Ambulance responded and all of the vehicles were towed by Roseburg Towing due to the damage.  Fortunately, no one was injured during the event. 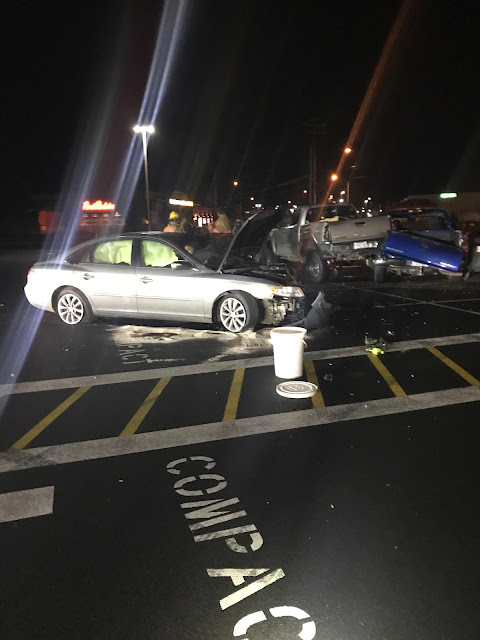