On March 21, 2020 at about 3:24 p.m., Oregon State Police (OSP) troopers and emergency personnel responded to Highway 138E near milepost 28 for a vehicle versus motorcycle crash.

Preliminary investigation revealed that a Honda motorcycle, operated by Joseph GAZAREK, age 28, from Roseburg, was westbound on Highway 138E at a high rate of speed.  A Toyota Corolla, operated by Schyler HAMILTON (F), age 21, from Roseburg, was eastbound and was in the process of turning into the Susan Creek Falls parking area.  The motorcycle impacted the right front of the Toyota Corolla and GAZAREK was ejected from the motorcycle.

GAZAREK was pronounced deceased at the scene by emergency responders.  HAMILTON and her passengers Enrique GONZALES (M), age 19, from Myrtle Creek, and a juvenile male, from Roseburg, were transported to Mercy Medical Center with possible injuries.

The westbound lanes of the highway were closed for over three hours.  Traffic was reduced to one lane for the duration of the investigation.

Investigators are looking at speed of the motorcycle as a contributing factor in the crash.  GAZAREK was wearing a protective helmet at the time of the crash.  HAMILTON, GONZALES and the juvenile male were all wearing safety restraints. 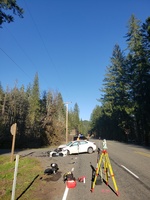