WINSTON, Ore. - The Douglas County Major Crimes Team is investigating a shooting which has left two men dead and another in custody.

At 1:58 am on Sunday March 15, 2020, Douglas County 9-1-1 dispatchers received multiple reports of gunfire heard in the area of Ford Street. Another caller reported finding two men on the ground bleeding at 280 Ford Street.

Law enforcement from Winston Police Department, the Douglas County Sheriff's Office and Oregon State Police responded to the scene. The two victims, whose names are being withheld at this time, were found to be suffering from gunshot wounds and died at the scene.

At 2:36 am, dispatchers received a call that a male wished to turn himself in regarding the shooting.

Officers contacted the male, 34 year-old Winston resident Savino David DeSantiago, who was ultimately arrested and charged with Murder. He is currently lodged in the Douglas County Jail. 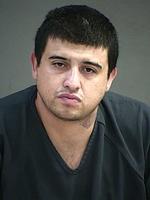