On 04-28-20 at around 4:45 pm RADE detectives observed a white Toyota pick-up in Cave Junction near Perfect Pizza, 212 N Redwood Hwy, with a stolen license plate. The detectives requested a marked patrol vehicle and an Oregon State Police (OSP) Sergeant who was in the area responded. With assistance from OSP, the occupants were detained and interviewed. The license plate was determined to be stolen out of the City of Grants Pass on 04-21-20. A female occupant, Iris Marie Jessee 21 years old, was taken into custody after a consent search and lodged for PCS/DCS Methamphetamine and Unlawful Possession of a Firearm. Seized during the investigation was over 50 grams of methamphetamine, packaging material and cash. Also seized was a firearm in Jessee's property, which was readily accessible to her. The stolen license plate was seized and will be returned to DMV. Anyone with questions or information regarding this case can call 541-450-6370 and reference case #20-19068. 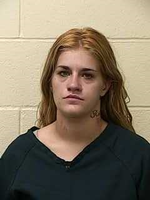