TILLER, Ore. - A Tiller man is in jail after he pulled a firearm on deputies attempting to serve court papers Sunday morning.

At approximately 10:53 AM, on Sunday, April 19, 2020, deputies went to a residence in the 2100-block of Devils Knob Road in Tiller to serve court paperwork to 51-year-old Daniel Paul Schrack. When deputies arrived, they made contact with Schrack outside of the residence. Schrack became confrontational and began to retreat into a shop. One deputy gave Schrack orders to stop and then deployed his TASER, which did not have any effect. At the same time, another deputy attempted to detain Schrack at which point he lunged toward the shop door, turned and drew a firearm pointing it at deputies. He did not fire the weapon.

Deputies communicated with Schrack until he surrendered at 12:20 PM. He was taken into custody without further incident and lodged at the Douglas County Jail on the following charges: 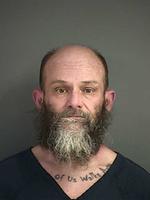