On May 16th, 2020, Lincoln County Sheriff’s Deputies were dispatched to a disturbance outside a business in the 300 block of Hemlock Street in Waldport.  A witness reported the two people involved entered a single vehicle and left at a high rate of speed after driving over the curb and landscaping.  Deputies were familiar with the vehicle the witness described and attempted to contact the owner at his residence, however he fled from the location just prior to deputies arriving.

The other person involved in the disturbance emerged from the residence and began describing what took place.  An investigation revealed 48-year-old Waldport resident Richard D. Leach had forced an unwilling victim into a vehicle at gunpoint. Leach then drove the victim to several places around the Waldport area before stopping at a location where the victim was able to escape.  Leach physically assaulted the victim multiple times during the encounter.

A firearm was recovered during the investigation.  Deputies searched for Leach extensively over the next several days.  The vehicle Leach used in the incident was found burned on a remote forest road during the search, but Leach could not be located.

On May 28th at about 4:45 PM, Leach was seen in a Toyota Corolla near milepost 3 on Highway 34 outside of Waldport.  Deputies attempted to initiate a traffic stop on Leach, but he failed to yield, and a pursuit ensued.  As the pursuit was initiated, the Corolla was reported stolen from a residence on Highway 34.

The pursuit lasted approximately 45 minutes over forest roads between East Canal Creek Road and East Eckman Creek Road.  During that time, Leach struck a vehicle passing by and attempted to hit the involved patrol vehicles.  Despite both rear tires failing, Leach continued to attempt to elude deputies.  To prevent the pursuit from going back into Waldport and heavier traffic, the vehicle’s front tires were deflated with spike strips near the intersection of E. Eckman Creek Rd and E. Lakeside Dr.

The vehicle mechanically failed in the 500 block of E. Eckman Creek Rd and rolled to a stop.  Leach refused to comply with repeated verbal commands to surrender.  Sheriff’s Office Patrol K9s Bonni and Nix were deployed.  K9 Nix entered the vehicle and successfully apprehended Leach.  Medics were summoned to the scene for injuries Leach sustained during the K9 apprehension.  While being treated at the scene, Leach spit blood on emergency medical personnel.  Leach was taken into custody and transported to Samaritan Pacific Communities Hospital.

Leach was charged with Kidnapping in the First Degree, Unlawful Use of a Weapon, Criminal Mischief in the First Degree, Unauthorized Use of a Vehicle, Attempting to Elude Police, Aggravated Harassment, Coercion, Pointing a Firearm at Another, Reckless Driving (x2), Menacing, Assault in the Fourth Degree, Failure to Perform the Duties of a Driver (Misdemeanor), Recklessly Endangering Another Person, Disorderly Conduct in the Second Degree, Offensive Littering (x3), and Criminal Trespass in the Second Degree.  His bail was set at $730,000. 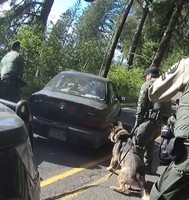