On Thursday, May 7, 2020 at 7:14pm, officers from the Redmond Police Department were dispatched to a home on the 2800 block of SW Indian Circle in Redmond, Oregon for a report of a domestic disturbance.  The victim reported being assaulted, choked, and threatened to be killed with a knife.

Officers responded to the scene and were met by the victim who was able to escape from the residence.  Officers attempted to contact the suspect, 36-year-old Redmond resident Daylen Anderson, without success.  Daylen refused to communicate with officers, messaging a family member that he had left the residence.  With the assistance of Deschutes County Sheriff’s Deputy Mangin and his K-9 partner Ares, officers determined that Daylen climbed into the attic.  Officers used a handheld thermal imaging device, pole-camera, and K-9 Ares to positively identify Daylen’s hiding spot.  From there, officers successfully negotiated Daylen’s surrender without further incident.

Daylen Anderson was arrested and lodged at the Deschutes County Jail for the crimes of Coercion, Strangulation, Assault in the Fourth Degree, and Menacing.  His bail amount is $55,000.

The Redmond Police Department would like to acknowledge the strength and courage the victim showed by reporting this incident to law enforcement, which in turn potentially saved her own life.  If you are experiencing family violence and are in need of resources to help you through difficult times we encourage you to reach out to Saving Grace, whose mission is to provide comprehensive family violence and sexual assault services in Central Oregon and to promote the value of living life free from violence.  Saving Grace’s 24-hour helpline number is 541-389-7021.

The Redmond Police Department would like to also thank the Deschutes County Sheriff’s Office for assisting in the investigation.  RPD strives to make Redmond the Safest Community in Oregon by serving with “Excellence, Teamwork, and Professionalism.” 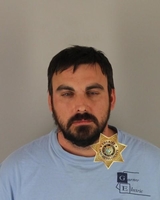