On Thursday, May 14, 2020 at approximately 6:18 P.M., Oregon State Police Troopers and emergency personnel responded to a single vehicle crash on Hwy 101 near milepost 252.

Preliminary investigation revealed that a commercial motor vehicle (CMV), operated by Donald Games (53) of Coos Bay,  was traveling southbound when it failed to negotiate a curve, left the roadway, and struck a tree.  After the crash the CMV caught fire and Millington Fire Department and Green Acres Fire Department responded and extinguished the flames. 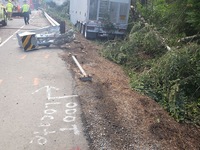