On Sunday, May 17, 2020 at approximately 2:09 P.M., Oregon State Police Troopers and emergency personnel responded to a two-vehicle crash on Hwy 101 milepost 63,  just north of the Tillamook Cheese Factory.

Preliminary investigation revealed that a BMW Z3, operated by Samuel Hacker (36) of Scappoose, was traveling northbound when for unknown reasons veered into the southbound lane where it struck a Ford Explorer, operated by Julie Leonnig (43) of Tillamook.

A passenger in the BMW, Shayna Tacadena (32) of Gresham, was transported by ground ambulance to Adventist Health Tillamook Hospital with serious injuries.

Hwy 101 was closed for approximately 3.5 hours following the crash. 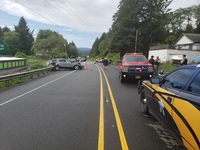