On the morning of May 23, 2020 the Bend Police Department was advised of a possible missing person from an address in the City of Bend.  During their investigation, Bend Police Officers determined the missing, Tavion Linett was last seen with friends in the Millican Valley (east of Bend).  He left them around 10 PM on May 22, 2020 to return home.  In the morning, it was determined Linett had not gone to work and did not appear to have made it home.

Bend Police Officers went to the area of Hwy 20 and FS Road 23 (Spencer Wells Road) to begin searching for Linett.  A Deschutes County Search and Rescue Deputy also responded to begin an initial search and investigation.  At approximately 9:30 AM, a family friend located Linett on FS Road 23 just south of Hwy 20.  Bend Police Officers and the Deputy responded to the scene along with Bend Fire and Rescue.

It was determined that Linett left his party along FS Road 23 to head home.  After traveling a short distance (approximately ½ mile), he failed to negotiate a dog-leg curve and traveled off the roadway coming to rest off the road.  Linett had serious injuries and remained laying in the brush all night.  Due the nature of his injuries, Linett was flown to St. Charles Medical Center in Bend by AirLink.  Bend Police Officers remained on scene and assisted with the crash investigation.

Alcohol does not appear to be a factor. 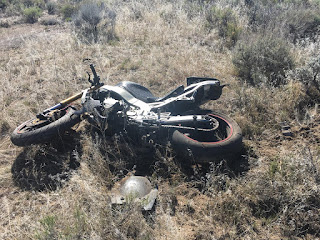