On May 11, 2020, Officers attempted to stop a tan Toyota pickup on NE D Street near NE Beacon Drive. The pickup, known to be driven by Justin Sager, was believed to be involved in the theft of motorcycles and other property in the northeast area of Grants Pass.

The vehicle turned north on Beacon Drive and fled at a high rate of speed, running stop signs and going into oncoming lanes of travel. The primary officers terminated the pursuit in the interest of safety to the community. Other officers were able to locate the vehicle as it turned into a dead street on Lynda Lane off of NE Hillcrest Ave, and crashed into a parked car. The driver fled on foot into a vacant field. Several officers from multiple agencies established a perimeter of the area to keep the suspect from continuing to flee.

Utilizing the Unmanned Aerial Surveillance (UAS) device and a K9 unit, members of Grants Pass PD, Josephine County Sheriffs, and Oregon State Police were able to locate Sager in a large blackberry thicket. Sager was taken into custody without further incident. The investigation lead to the arrest of

Sager on the following charges:

Unauthorized Use of a Vehicle x4

Justin Sager was lodged at the Josephine County Jail on the above charges.

If anyone has any further information regarding the events of this case, please call the Grants Pass Department of Public Safety at (541) 450-6260 regarding case 20-21449. 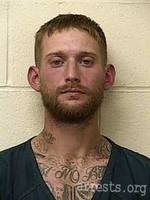