On 6/14/20 at 12:32 p.m., deputies from the Deschutes County Sheriff’s Office were dispatched to a deceased male, who had been located by ATV riders.  This location was approximately one mile north of Hwy 20 near milepost 28.   Deputies arrived on scene and began conducting a death investigation.   Detectives and a Deputy Medical Examiner from the Deschutes County Medical Examiner’s Office arrived on scene to assist in the investigation.  The male was later identified as John Eric Sims, age 36, of Portland, Oregon.

The investigation determined Sims had come to visit Central Oregon and his destination was the Pine Mountain Observatory.  Sims drove to an area above the Pine Mountain U.S. Forest Service Campground and parked his 2008 Subaru Forester.  It is believed Sims left his vehicle riding his mountain bike and at some point became separated from his bike.  Sims appeared to have walked for several miles until he collapsed at the location where he was located by the ATV riders.   Based upon the condition of Sims’ body, it appeared he died due to exposure to the elements. It was also determined his body had been at the location for several days.   There was no evidence of foul play.  Sims’ next of kin has been notified.

Investigators are still attempting to locate Sims’ mountain bike, which is described as being an unknown brand mountain bike that is red in color.   The public is encouraged to contact the Deschutes County Sheriff’s Office at 541-693-6911, if they locate an abandoned red mountain bike in this area. 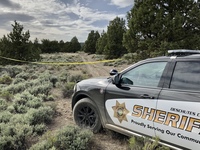