On 06/16/20 at approximately 1015 hours Jackson County Sheriff’s Office deputies responded to an interrupted burglary in progress at a hemp storage facility on East Evans Creek Road outside of Rogue River, Oregon.

Employees at the facility found two white male adults dressed in camouflage clothing attempting to steal totes containing processed hemp. The suspects fled on foot into nearby woods. A possible suspect vehicle was left behind at the scene.

One of the suspects has been identified as Padyn Daniel Dineen (DOB: 10/19/89). Dineen currently has an outstanding felony warrant for First Degree Burglary.

If anyone has information that may assist this investigation, please call the Jackson County Sheriff’s Office Tip Line at 541-774-8333. You may also call Emergency Communications of Southern Oregon dispatch at 541-776-7206 to speak with a deputy. 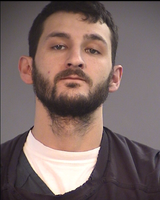