On Saturday, June 14, 2020 at approximately 2:42 P.M., Oregon State Police Troopers and emergency personnel responded to a two vehicle crash on Hwy 20E at the intersection of Powell Butte Hwy.

Passengers in the Ford, Markus Mastrud (62) of Bend and Owen Leinweber (54) of Bend, were transported to the hospital with serious injuries - Amy Bell (40) of Bend was not injured.

Masters and his two passengers Pamela Radabaugh (31) of Bend and a male juvenile were not transported by emergency personnel.

Alcohol is believed to be a contributing factor in the crash.

Failure to use seat belts is believed to be a factor in the injuries. 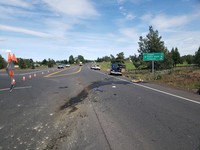