On Thursday June 18, 2020 at approximately 9:40 A.M., Oregon State Police Troopers and emergency personnel responded to a single vehicle crash on Interstate 5 near milepost 24.

Preliminary investigation revealed that a 2018 Volvo Commercial Motor Vehicle (CMV) was traveling northbound on Interstate 5 when for unknown reasons the CMV veered onto the shoulder, struck a guardrail, and came to rest in a small creek.

The operator of the CMV sustained fatal injuries and was pronounced deceased.

The name will be released after next of kin notification has been made.

The unnamed creek accesses Bear Creek which is a tributary of the Rogue River.  An estimated 50-75 gallons of diesel spilled into the creek system.

Emergency crews are currently recovering the CMV and containing the spill. 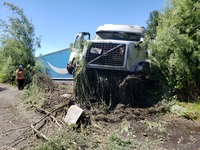