On June 13, 2020 at approximately 1:09 a.m., Deschutes County Sheriff’s Office Deputies responded to a structural fire at High Lakes Towing and Recovery located at 15770 Burgess Rd in La Pine. Upon arrival, Deputies discovered the west half of the shop at High Lakes Towing was fully engulfed with flames extending through the roof. Several vehicles near the shop along with a 5th Wheel RV were also engulfed in flames. Nearby residents were quickly evacuated for their safety.

Eddie Newingham who is an employee of High Lakes Towing, was refusing to leave the burning structure due to his concerns over a missing cat. Firefighting efforts to save the burning building were temporarily halted due to Newingham repeatedly exiting and re-entered the building while looking for his cat.  Newingham exhibited an aggressive and confrontational demeanor towards law enforcement during their attempts to gain his cooperation.

Newingham was ordered to leave the burning building numerous times, but continued to do so while armed with 2 long handle axes that he used to menace law enforcement deputies who approached him.

Newingham was eventually cordoned off from the burning shop in an adjacent fenced in area. Newingham was coaxed into relinquishing the axes he was carrying, and deputies used further deescalation techniques to calm Newingham's aggressive behavior.

La Pine firefighters were able to extinguish the fire in the burning vehicles and building, but not before extensive damage was done. Total losses to property at this point are unknown. The owner of High Lakes Towing was out of town but was notified by phone of the damage to his business. The fire is believed to have been caused by welding repairs being performed on a RV parked next to the shop. Newingham was not cooperative with questions regarding the fire.

Newingham was given a criminal citation to appear in Bend Circuit Court on the above listed charges.

The Deschutes County Sheriff's Office would like to thank La Pine Fire Department, Oregon State Police and Sunriver Police Department for their assistance with this incident. 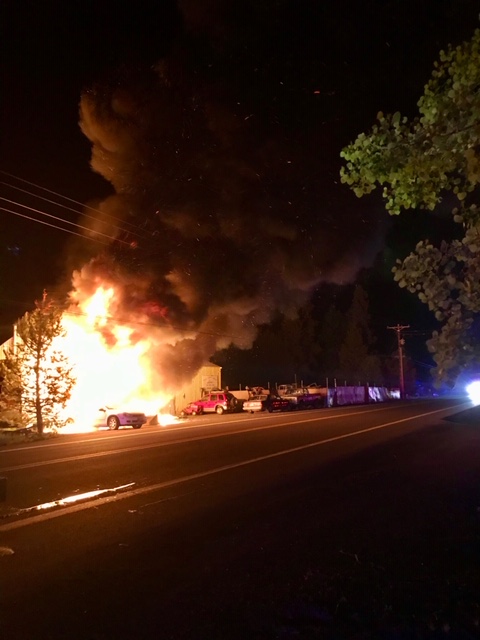