On Tuesday June 9th, 2020 at approximately 12:46 am, the Junction City Police Department received a report of a shooting at a Junction City Residence.  The caller reported that someone had fired a bullet into the front of their house.  The complainant stated that minutes after she got out of her shower a bullet ripped through one wall, partially penetrated another wall, and the remaining bullet fragments ricocheted around the edge of the tub coming to rest near the drain.  Responding officers canvassed the area but were unsuccessful in locating the responsible party.

At about 11:01 PM Tuesday night the Junction City Police Department was notified that a suicidal male subject had just fired multiple rounds into a residence in Harrisburg and was possibly returning to a different residence in Junction City to harm his girlfriend.  Subsequent investigation revealed that Victor Burgoyne, age 44, had just fired multiple gunshots into the home of his girlfriend’s parent’s house in Harrisburg and was threating to kill multiple other family members and friends if she did not meet up with him.  Further investigation discovered evidence that Burgoyne was the person who fired the bullet into the house earlier Tuesday with the intent to kill the female, a friend of his girlfriend.  Burgoyne continued to make threatening phone calls and texts to his girlfriend throughout the early morning hours.

Burgoyne is described as a white male, 6’3” tall, 163 pounds, is balding/shaved/receding hairline, and has hazel-colored eyes.  Burgoyne may be unshaven with a mustache and goatee that is brownish grey in color.

Burgoyne may be driving a white 2003 Ford F350 4-door crew-cab pick-up truck with Oregon license # 521LBY.  Burgoyne may also be towing a 20-25 foot Outback camper trailer with out of state license plates.  The trailer is mostly white in color with light grey or beige trim near the bottom portion of the trailer.  There is significant damage to the awning on the passenger side of the trailer from striking a tree while partially open.

An extensive multi-jurisdictional search for Burgoyne throughout Linn and Lane Counties is underway, but as of the time of this press release his location remains unknown.  Burgoyne is suicidal and extremely dangerous.  Burgoyne is wanted on multiple felony and misdemeanor charges.  Anyone with information on Burgoyne or his whereabouts is asked to contact the Junction City Police Department Immediately at 541-998-1245. 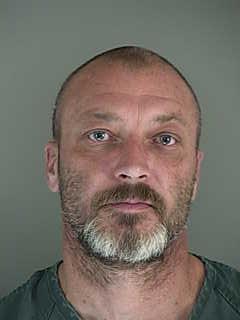