RIDDLE, Ore. - A Roseburg man was taken into custody on Thursday after shooting a firearm and pointing it at another person.

On Thursday, June 18, 2020, shortly before 2:30 PM, 9-1-1 dispatchers received a report of a shooting in the 300-block of Evergreen Ridge Road. It was learned gunshots had been fired from a vehicle and the suspect had pointed a firearm at another individual. The suspect left in a vehicle after picking up his brother.

Law enforcement officers from the Sheriff's Office and Myrtle Creek Police Department responded and were able to locate the vehicle, a silver Ford F150, on Main Street in Riddle and attempted to conduct a traffic stop. The driver, identified as 35 year-old Roseburg resident Camden B. Ellenwood, failed to stop for pursuing officers. Ellenwood eventually stopped on Interstate 5 near milepost 108 where he was taken into custody.

Deputies learned Ellenwood had gone to the location to pick up his brother, 40 year-old Cirdin Ellenwood also of Roseburg, who had called for help and stated he he was being confronted by some individuals. Camden, instead of calling law enforcement, attempted to intervene on his own.

Deputies later learned the story Cirdin had provided to Camden was not accurate.

The firearm was recovered and Camden was arrested and lodged in the Douglas County Jail on the following charges: 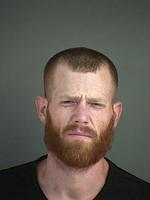