ROSEBURG, Ore. - A Roseburg man was arrested Sunday after menacing his girlfriend with a firearm.

Shortly after 12:00 pm on Sunday, June 14, 2020, 9-1-1 dispatchers received a call from a female stating her boyfriend was brandishing a firearm and threatening to kill her. Deputies were able to get the female to walk out of the house to a safe location where they interviewed her.

Deputies learned 55-year-old Shayne Randall Dudley of Roseburg had gotten into an argument with his girlfriend and later retrieved a firearm, which caused her to fear for her safety.

Deputies contacted Dudley by telephone. He cooperated with law enforcement and walked down the road to deputies where he was taken into custody and later recovered the firearm mentioned in the incident.

He was lodged in the Douglas County Jail for Menacing. 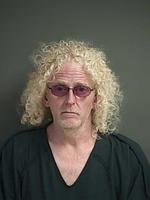