On Thursday, June 11, 2020, at 8:54 p.m., a Washington County Sheriff’s Office deputy responded to reports of a suspected drunk driver near SW 184th Avenue and SW Blanton Street in the community of Aloha. After observing the driver swerving through the streets, nearly hitting a few parked cars along the side of the road, the deputy attempted to stop the car. The driver of a silver Toyota Corolla initially pulled over, but then decided to take off before contacting the deputy.

During a short pursuit, the driver was observed speeding down SW Farmington Road, failing to slow down or stop for stop signs and red lights. At one point, the driver crashed the car into a ditch while attempting to turn onto SW Rosa Road, but then backed up and continued to drive away.

For safety reasons, the pursuit was terminated, but a short time later, deputies observed the suspect’s car crashed into a parked car near SW Rosa Road and SW 195th Avenue.

Upon arriving at the suspect’s car, deputies observed the driver holding a knife. While ignoring commands to drop the knife, the driver proceeded to stab himself in the stomach, and then again in the chest. Deputies were able to remove the driver from the car and provide the man with access to emergency medical care.

The man was taken to a local hospital with life-threatening injuries where he remains in critical condition. During a search of the man’s vehicle, a large amount of cash, marijuana and needles were found inside. The man is being charged with DUII, attempt to elude, reckless driving, reckless endangering, and failure to perform the duties of a driver. 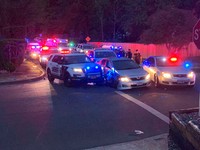