On Sunday, July 26, 2020 at approximately 7:07 P.M. Oregon State Police responded to the report of a motorcycle crash, which occurred on State Route 34 near mile post 14 in Lincoln County.

Preliminary investigation revealed a gray 2012 Ducati motorcycle, operated by Kenneth Robert KEARNEY (51) of Waldport, was westbound negotiating a sweeping left turn when, for an unknown reason, the vehicle went off the westbound shoulder.  The motorcycle came to an uncontrolled rest in the roadside brush.  Kearney was ejected off the motorcycle during the crash. 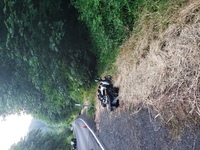