On Saturday, July 25, 2020, at 2:04 a.m., Washington County Sheriff’s Office deputies responded to a single-vehicle crash on SW River Rd, South of SW Farmington Rd. A single-vehicle had left the road and struck a tree.

Deputies arrived and found that a single vehicle had been traveling South on SW River Rd. at a high rate of speed. The vehicle left the roadway and struck a tree. The driver, 23-year-old Edelmir Mata- Garcia, suffered minor injuries in the crash and was transported to OHSU. The passenger, 24-year-old Carlos Gonzalez-Tapia was pronounced dead at the scene
.
Deputies suspect that Mr. Mata-Garcia had consumed alcohol and was driving at a high rate of speed. They believe he lost control of his vehicle and crashed into a tree, killing his passenger. After investigating the crash and the suspicion of DUII, deputies arrested Mr. Mata-Garcia for Manslaughter in the 2nd degree, DUII, and Reckless Driving. He was lodged at the Washington County Jail. 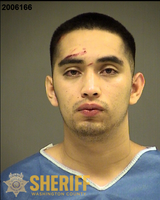