On July 8, 2020 investigators developed information that Hagenno might be associated with a vehicle.  Investigators located that vehicle at approximately 2:00 P.M., on Hwy 238 near Jaynes Dr.  OSP with assistance of the Grants Pass Department of Public Safety made contact with vehicle and Hagenno was inside and taken into custody and lodged at the Josephine County Jail on charges of Murder 2, Unlawful use of a Weapon, and Felon in Possession of a Firearm.

Bret Alan Hagenno was taken into custody today - July 8, 2020.  The details of the arrest will be posted when they are available.

On June 24, 2020 at approximately 3:45 P.M., a shooting occurred at Pinecrest Drive and Tiffany Way in Grants Pass OR. Detectives located Theodore Homer Robison (55) from Josephine County there shot several times and he was pronounced deceased..

Investigators have identified as a suspect and believe he could be armed and dangerous.
Hagenno is described as 6 foot tall, approximately 250 pounds and balding. He may or may not have a beard and is known to frequent Josephine and Jackson Counties.

Oregon State Police Major Crimes Section Detectives are asking for the public’s help in locating Hagenno who is wanted for Murder II in Josephine County. If anyone has seen Hagenno or knows his whereabouts, they are asked to contact the Oregon State Police Southern Command Center at 541-664-4600 and reference case SP-20-173329.

Hagenno is considered to be armed and dangerous. If located, do not contact and call the police (911).

On June 24, 2020, at approximately 4:00 P.M., Josephine County law enforcement responded to the area of Pinecrest Drive and Tiffany Way for a homicide investigation.

The deceased has been identified as Theodore Homer Robison (55) from Josephine County.
Investigators are asking for the public's assistance.  If anyone in the area of Pinecrest Drive and Plumtree Lane has video surveillance cameras, they are asked to contact investigators.

The Oregon State Police are the lead investigators and are being assisted by the Grants Pass Department of Public Safety, Josephine County Sheriff's Office and the Josephine County District Attorney's Office.

If anyone has any information they are asked to contact the Oregon State Police Dispatch Center at 541-664-4600. Reference case number SP20-173329. 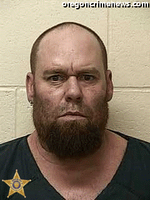