Young Woman Killed in Head On Crash in Lincoln City

On Saturday, July 11, 2020, at about 9:20 PM, Lincoln City Police responded to a reported motor vehicle crash on Hwy 101 in the north 2700 block. Upon officers’ arrival they initially found the crash involved a white 1992 Ford van and a small 2005 Chevrolet Aveo. As a result of the impact, the driver of the Chevrolet Aveo, identified as 21-year-old Julia Munson of Salem, Oregon, sustained significant injuries and was transported from the scene by Pacific West Ambulance to Samaritan North Lincoln Hospital. From there she was transported by Life Flight helicopter to a Portland area hospital, but sadly succumbed to her injuries and died.

The crash investigation revealed that the white Ford van had been traveling northbound on Hwy 101 and crossed over into the southbound lanes where it sideswiped another vehicle, a 2010 Honda Fit, which was traveling southbound.

The driver of the Ford van, identified as 27-year-old Alan M. S. Gates of Lincoln City sustained minor injuries and was also taken to Samaritan North Lincoln Hospital for medical treatment of those injuries. After being treated for his injuries, Gates was taken into custody and later transported to the Lincoln County Jail and lodged there on charges of Manslaughter II, DUII, Reckless Driving, Reckless Endangering, Driving While Suspended-Violation and Driving Uninsured.

The investigation into this crash continues and the Lincoln County District Attorney’s Office is reviewing the case and additional or revised charges could be placed on Gates.

We would also like to thank North Lincoln Fire & Rescue and Pacific West Ambulance for their assistance with this incident. The members of the Lincoln City Police Department would like to express our heartfelt condolences to the Munson family for the loss of their loved one. 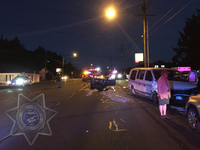