On Friday, August 28, 2020, at 4:59 p.m., Washington County Sheriff’s Office deputies responded to multiple 911 calls at Hagg Lake in western Washington County. Callers were reporting that a person had been struck by a boat in the water and was severely injured.

Deputies responded to the south side of the lake where the incident occurred. They found people rendering aid on the beach to a severely injured 13-year-old boy. Life Flight was activated and launched but was later turned back by paramedics on the scene who declared the victim deceased.

After speaking to witnesses, deputies believe the victim and his two younger brothers were playing in the water near the shore. His grandparents and mother were on the shore watching them play.

Witnesses said 21-year-old Hector Miranda-Bernal of Aloha was driving a 2002 Bluewater fiberglass ski-boat (18.5 foot) near the shore and struck the victim.

Mr. Miranda-Bernal was driving the boat in a no-wake zone at excess speed.

Mr. Miranda-Bernal stopped the boat and assisted in rendering aid to the victim.

Deputies investigating the incident suspected that Mr. Miranda-Bernal was impaired by intoxicants and driving recklessly when he struck the victim.  He was arrested and eventually booked into the Washington County Jail on the following charges:
His bail was set at $250,000.

The investigation is ongoing, and sheriff's deputies ask that anyone who witnessed the event please call non-emergency dispatch (503-629-0111.) The name of the victim is not being released at this time to ensure all family notifications have been made.

With temperatures remaining very warm and the upcoming holiday weekend approaching, the Washington County Sheriff's Office wants to remind anyone engaging in activities on the water to be extremely cautious and to avoid alcohol, especially when operating a boat. 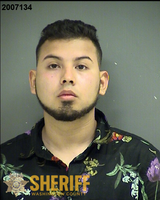