On August 23, 2020, at approximately 07:30 am Troopers from Oregon State Police Florence and Springfield Area Command responded to an injured male on SR 126 W near milepost 26.5.  The male victim was located on the highway with extensive injuries to his head, face and body and was transported to Peace Harbor in Florence for treatment of his injuries.

It was reported that Michael Light and two additional unknown males had assaulted the male victim for an extended period of time in his campsite before Michael Light left with a female victim against her will.  At some point in the early morning hours the male victim escaped into a heavily forested area and hid until daylight hours before he was eventually found on the highway.

An area search located Michael Light and the female victim in a vehicle in the area.  Michael Light was taken into custody without further incident.  The female was treated at the scene for minor injuries.

Johnathan Dakota Appelt is described as a white male standing 6’tall and weighing approximately 185 pounds with short blonde hair and blue eyes.  Appelt has a prominent tattoo on his neck.

Community members are asked to not attempt to contact or apprehend either of the men and they should be considered armed and dangerous. 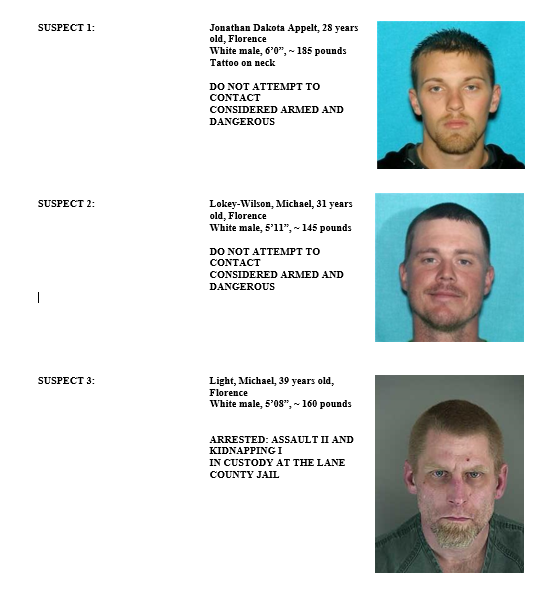