DOUGLAS COUNTY, Ore. - Deputies are looking for information as to the whereabouts of a missing 22-year-old Roseburg man.

Austin Allen Wilkison was last seen on Friday, July 31, 2020, at approximately 7:30 pm at a residence on Little Valley Road. Wilkison had reportedly planned to meet friends and return home. He has not been heard or seen since and family is concerned about his welfare.

Wilkison is known to frequent the Glide/Idleyld Park area and may possibly be in the mountains, particularly the Swift Water, Wright Creek and Steamboat Falls areas. He is described as 5'6'', 145 lbs, brown hair and hazel eyes. He was last known to be wearing a green hooded sweatshirt and khaki pants. He is associated with a silver 2001 Silver Acura CL with Oregon license plate YPS306.

Anyone with information is asked to contact the Douglas County Sheriff's Office at 541-440-4471 or by email to dcso.pio@co.douglas.or.us referencing case #20-3532. 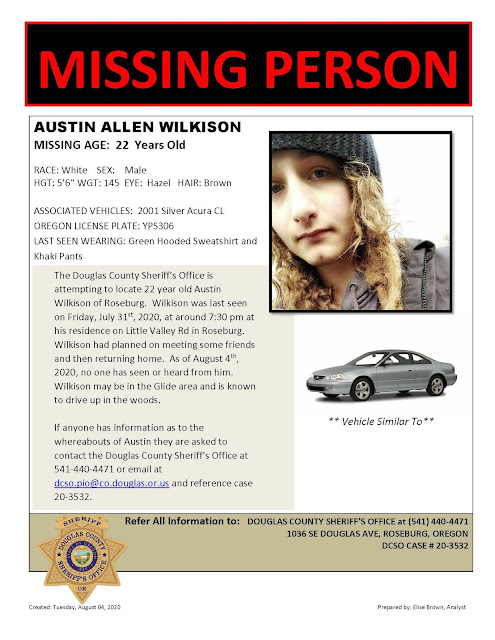