On 08/17/20, at about 1pm, Grants Pass Police responded to a “shots fired” call with fighting heard in the 1100 Block of SW Cottonwood Street.  Multiple police units responded to the area and established a perimeter around a home where the gunshot came from.  An adult male victim was located nearby and immediately linked to the incident.  Due to the severity of the crime, along with an elevated concern for community safety, police units secured a large portion of Cottonwood and evacuated several neighboring homes.  Although police made several attempts to contact people inside the home, nobody responded.

Eventually a female exited the home, followed by the male suspect – identified as Ajamu Lee Taylor (43).

Nobody was hurt or injured during the operation, and Mr. Taylor was charged with multiple criminal offenses to include Assault 1 and Unlawful Use of a Weapon.  The male victim was treated at TRMC with non-life-threatening injuries. 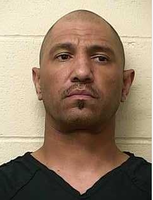