On September 10, 2020, Christian Martin Berry was arrested for Criminal Trespass II, Criminal Mischief II, Burglary II, Interfering with a Peace Officer and Theft I (for theft committed during an emergency in an area affected by fire, catastrophe or emergency). Berry was lodged at the Lincoln County Jail with a total bail of $127,500.

Last night, September 10, 2020, at about 9:15 p.m., the Lincoln City Police Department responded to a report of a broken window and a male inside Grocery Outlet, 4157 NW Highway 101. At the time, this location was part of a Level 3 mandatory evacuation zone as a result of ongoing firefighting efforts with the Echo Mountain Complex Fire. The initial report was made by an ODOT employee who was manning a roadblock at the intersection of NW Logan Rd and
N Highway 101, just below the Grocery Outlet location.

Lincoln City Police Department (LCPD) arrived on scene at about 9:20 p.m. and discovered a lower glass window of the automatic front door was broken out. A sleeping bag and backpack were laying near the damaged entrance door.

Additional LCPD officers responded and set up a perimeter. Officers had difficulty seeing inside the darkened store as the power was currently out in the area. The Lincoln County Sheriff’s Office (LCSO) K9 team was requested.

At about 10:08 p.m., the K9 team along with LCPD officers made entry into the building and began searching the store for intruders. During the search the suspect, identified as Christian M. Berry, was located sitting on the floor at the south end of the store drinking beer and listening to music on his cell phone.

Berry refused to obey verbal commands by officers to drop the beer bottle and stand up. A team of officers were able to place Berry in handcuffs and walk him to the front of the store.

Berry then refused to exit the store through the broken front door and was placed in a “WRAP restraint device, which allowed officers to carry Berry through the opening in the door. The “WRAP” was then removed.

Officers noticed Berry had a cut on his back and called for medical care, but Berry refused assistance. Berry was subsequently transported to the Lincoln County jail and lodged there on charges of Criminal Trespass II, Criminal Mischief II, Burglary II, Interfering with at Peace Officer and Theft I (for theft committed during an emergency in an area affected by fire, catastrophe or emergency.)

It should be noted that on July 22, 2020, Berry was cited and released (due to COVID-19 jail restrictions) by the Lincoln City Police Department for Burglary II, Theft I, Criminal Mischief III and Criminal Trespass II for entering and stealing merchandise from the Zuhg Life Surf Shop in Lincoln City.

The Lincoln City Police would like to express our thanks to the Lincoln County Sheriff’s Office for their assistance with this incident along with a special thank you to Deputy Akin and K-9 Bonnie for their help in locating and capturing the suspect. 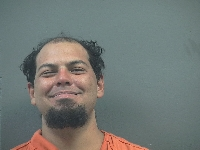