CANYONVILLE, Ore. - A Grants Pass man is in custody on rape charges this evening following his discharge from Mercy Medical Center.

On Saturday, September 5, 2020, deputies were dispatched to a reported rape of a juvenile which occurred in Canyonville. Deputies secured the scene and contacted detectives who took over the investigation.

The suspect, 43 year-old James Darren Smith of Grants Pass, was transported by ambulance from the scene and has been hospitalized since the incident occurred.

On Saturday, September 12, 2020, Smith was discharged from Mercy Medical Center and was arrested. He was lodged at the Douglas County Jail on the following charges:
The juvenile was known to Smith. 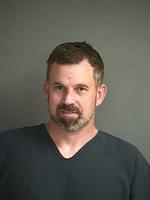