Gresham, Ore.—Tonight at 6:50pm Gresham Police officers responded to a report of a suspicious vehicle in the parking lot of an apartment complex in the 800 block of SE 187th. The person calling 911 gave a license plate on the vehicle and responding officers quickly learned the vehicle was reported stolen.

While more resources responded to assist them, officers followed the car to the area of SE 181 and SE Ash where they stopped the vehicle. The adult white male driver of the vehicle drew a gun and at least one Gresham police officer shot the suspect. Officers quickly applied first aid to the suspect and requested immediate medical attention. The driver was taken to the hospital for treatment, but his medical condition is unknown at this time and his identity has not yet been confirmed. Detectives and crime scene technicians responded to the scene to investigate the shooting.

If you witnessed the shooting and have not talked with police, please contact Det. Aaron Turnage at 503-618-3136. 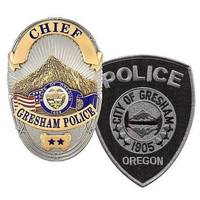