GLIDE – Oregon 138E (North Umpqua Highway) is expected to remain closed between Glide and U.S. 97 for at least a week due to hazardous conditions related to heavy winds and local wildfires.

Over the past three days, the Archie Creek Fire has expanded to more than 115,000 acres, mostly to the north of the North Umpqua River. The highway is also located north of the river. A second fire is located near Diamond Lake.

Trees, rocks and debris have fallen into the roadway in several locations, leaving some areas inaccessible. Several sections of guardrail have been destroyed by the fire. Signs and utility poles have also been destroyed. More than a hundred trees are in danger of collapsing onto the roadway. The fire has weakened slopes, posing a risk of landslides throughout the coming fall and winter. Bridges will need to be inspected for damage.

ODOT is developing short- and long-term plans to address these hazards.
Over the next several days, ODOT will monitor the fire and work with emergency services so that fire crews can maintain access to the area.

As the fire moves away from the highway, ODOT will remove debris from the roadway in an effort to open the highway to at least a single lane of traffic. This may involve flaggers and pilot cars.

The third phase will likely begin later this month, when the fire is more contained, and continue for several weeks or months. This will involve removing hazard trees and addressing weakened slopes. We anticipate frequent lane closures throughout the fall. Up-to-date information will be posted on www.TripCheck.com.

Emergency responders and evacuees have priority during this emergency. Other motorists are advised to avoid the area. Do not put yourself at risk by using forest roads to get around fire closures. 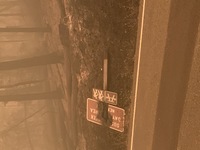